The problem of plastic pollution in the marine environment has become quite popular over the last few years, thanks to many great people out there, who have opened their eyes and hearts, and raised their voices to increase awareness. NGOs, private initiatives and even politics have taken action and reached out to the people. More and more people finally know, plastic is a huge problem for our environment and for all living things. Although it’s difficult to bear, we have to accept that our consumption habits and our careless behavior destroy the very base we are all depending on. In case of plastic pollution, the talk is often about single-use plastics, like straws, plastic bottles or plastics bags… what most people don’t think of is the problem of pollution through cigarette butts.

This is astonishing, since it is the most found litter item worldwide. They contain many toxins and are often made from non-biodegradable plastics and pollute millions of liters of water when carelessly dropped on the ground. In 2009 it was estimated that more than 3 million cigarettes or cigarette butts were collected from marine and freshwater habitats globally. Each of them containing more than 100 chemicals, many of which are highly toxic to living organisms.

Realizing this made me want to change something about this!

I created my very own and first campaign called “pock it – don’t drop it“ (https://buttcampaign.wixsite.com/website). What I often feel is that there are many people out there who want to become active, but often don’t really know how to start (I used to have this problem myself). This inspired me to create my website, with which I want to inform people about the problems regarding cigarette butt litter and provide ideas and inspiration of how to get involved (check out my “take action“ section).

I have also created a “spot of hope“ (inspired by Sylvia Earle´s campaign) around my house at Praia de Faro, Portugal, where I frequently collect cigarette butts and have installed an ashtray made from an old container next to which I put my campaign flyer. It is always great to see people stop by, read my words and to hear them talk about the issue. It is my way of providing a place to put the butts, so that there is really no excuse to drop it on the ground and to spread the word. I also distributed flyers around the local bars and coffee places and want to start a few pilot ashtray box installations with them soon. 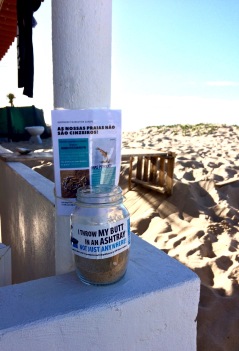 I hope to reach some people with my campaign! Together we can make this a bigger movement, create more spots of hope and spread the message!